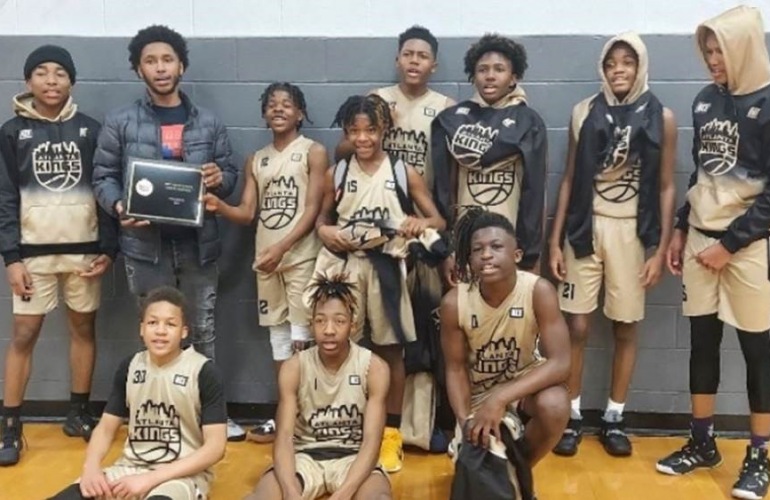 On April 29, the 4Ward Working Group in Atlanta sent out a missive: The Atlanta Kings were invited to participate in a basketball tournament "Balling on the Beach" in Miami, and they were in need of travel funds.

The Atlanta Kings is the name of a basketball program comprised of young men in the 7th and 8th grades, many of whom reside at the Wingate properties in Atlanta. The Atlanta Kings started as a rec league basketball team called the Martin Luther King Eagles.  At the advent of the Covid-19 in March 2020, the recreation center where they practiced was closed due to the pandemic. Still, the players had come to the attention of Coach Jett Phipps, who began to coach them outside of the city Rec League and formed them into a competitive team. The parents and the coach pooled money together, bought uniforms and took them on the road. The newly formed Kings (formerly the Eagles), played their first game as a non-rec team in December 2020. Since then, Coach Jett has bonded with enough athletes and believers to take the Kings from just one team to now a program.  In fact, they have entered and competed in tournaments across the country and are now ranked 30th in the nation.

The Florida tournament would be the most competitive venue they had played, and they needed to raise $20,000 to fly to Miami, stay in hotels and feed a program of active players and chaperones.  Mark Schuster, President and CEO of the Wingate Companies, received the 4Ward missive and issued a challenge:  If the Kings could raise $10,000, Mark would match it.

As the tournament approached, the Kings looked short of their $10,000 effort.  But just before the tournament, the Kings hit $10,000, and Mark Schuster matched it.  The teams went on to win 6 out of 9 games, with the 7th grade Kings winning first prize in their division.  “We are proud to be a part of this team’s journey, said Mark Schuster, President and CEO of the Wingate companies.  “We are especially proud of the team’s Wingate residents, who add so much to the team’s success.”  Coach Jett added, “The Balling on the Beach tournament was our biggest tournament so far, so this community support is a big deal to these kids and this program.”

Congratulations to the Atlanta Kings! This site uses cookies to improve your browsing experience. By using our site you agree to our use of cookies.

I Agree
How We Use Your Data Contact Us